Recently, star cricketer Mahindra Singh Dhoni filed a plea at SC claiming about 48 crores of unpaid dues from Amrapali group. The group is facing a fraud charge and the case is with SC. The buyers who invested in the residential projects promoted by the group fought a long battle to ensure that the Supreme court of India intervenes and help them get their property and or refund from the company. The Amrapali buyers are raising a point: till the time the Amrapali group was engaged in a legal battle with its customers, Dhoni did not say a word. Now, for his own money, he is knocking at the door of SC. Customers consider this behavior as a breach of trust because customers bought the property with an idea that the project is not only endorsed by Dhoni, he himself owned a penthouse there. Several customers took to media saying that Dhoni should have stood by them to help them get their flats or money refunded rather than just fighting for his own endorsement money.

This raises two key issues; the first one relates to the moral responsibility of a celebrity who endorses a product or service (in this case, it is a very high value and high involvement purchase) and the firm gets entangled into financial fraud, and, the second one is about the post hoc impact of such fraud on the celebrity brand value. The key question here is; is there a trust recovery mechanism?

Celebrity endorsements have several risks for the brands such as eclipsing of the brand itself by the celebrity’s powerful brand image. The reverse of that is also true “when the brand does something deemed unacceptable by consumers, the celebrity can also be seen in this light. This could cause followers of the celebrity to be doubtful of them, not just the brand. Assumptions could be made that the celebrity agrees with all actions of the brand and become less credible by association”. (https://en.wikipedia.org/wiki/Celebrity_branding#cite_note-:13-54)

Clearly, in the case of Amrapali, the buyers believed in the endorsements made by cricketer Dhoni and now they feel let down by him. There is a clear case of a wrong moral judgment that kept Dhoni silent on the whole issue of project delays. The buyers created their own self-help group and took help of the regulators to seek justice from the highest court in the country. No word from the celebrity who urged on the potential buyers to trust Amrapali brand because he believed it to be trustworthy.

A mechanism to recover trust

Dhoni did break his silence but only to claim his endorsement fees from his client, Amrapali Builders. This move was certainly ill-advised. A futile attempt to tell the customers; look I am also a victim of this fraud! That is a very meek way of handling the issue of trust erosion. Any celebrity in a situation like this should not only be seen and heard as being empathetic towards the customers but they could also seize the opportunity to engage into customer advocacy for safeguarding customer interests from such firms. A potent mechanism, therefore, is to engage directly with the factors that led to the 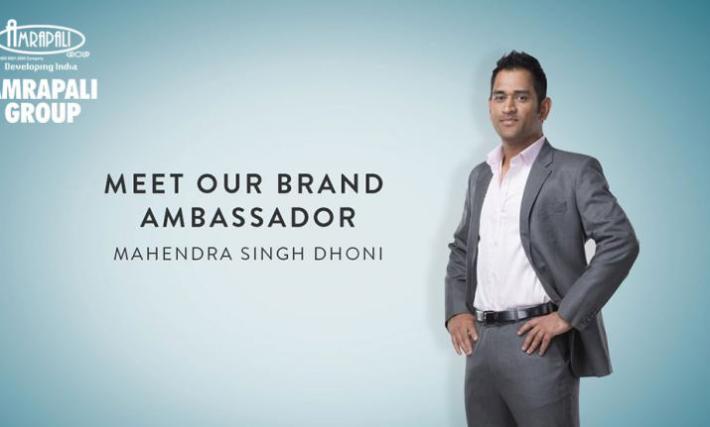 loss of trust and amplify the intent to work on those factors. This could help in regaining trust and strengthening the celebrity brand with more power and credibility.